Old style mica capacitors were used in the pi-net matching sections of several vintage transmitters and the combination of age, heat, and high RF currents have made them likely failure items.   My Collins 32V-2 transmitter was to the point where it would not properly load to full power on 75 meters so something had to be done.   Mica capacitors are no longer made but fortunately new multilayer ceramic capacitors are and provide superior performance and specs.

Before going into the replacement itself, take a few minutes to understand how modern automated manufacturing and testing processes have been applied to produce multilayer ceramic capacitors to such high standards:   KEMET VIDEO

One benefit of automated manufacturing is consistency - once a capable process has been developed,  modern automated factories can reproduce the same result time after time, millions upon millions of times each year, with nearly zero defects.    In contrast to the old mica capacitors that often fail due to variabilities that allow moisture entry, metal migration, and changes in dielectric strength to cause deterioration and failure.

Multilayer ceramic capacitors are commonly available with voltage ratings that greatly exceed the original mica caps.   I went with 3KV rated capacitors for a nice safety margin.   While not all capacitance values are available, multiple capacitors could be connected in series or parallel if needed.  Be sure to choose only C0G/NPO type capacitors!   Here is a link to the 220pF 3KV capacitors I used:  MOUSER LINK

The biggest problem in the Collils 32V-2 is the limited access to the output circuitry but by removing the plate choke it can be done.   The first step is to remove the three mica capacitors, Clip or unsolder the leads at the capacitors and leave them attached to the switch as they will be re-used.

The size of the 3KV capacitors is about 1/4" square so the usual fear about hand soldering SMT devices doesn't apply.   However it is not good practice to try to solder leads directly to the metallized ends of the parts;  the photos show how to make a simple PC board that provides proper mounting and attachment.  I needed 3 capacitors but the board can be made a big as needed.   A small piece of copper-clad one-sided laminate is all that is required - readily availble from eBay sellers if necessary.

The pad layout is drawn or marked off with masking tape directly on the copper,  It's a matter of a few minutes work to scribe the required cuts with an Exacto knife and peel away the unwanted copper, leaving the pattern shown.  Apply a bit of solder to one corner and the laminate will peel up easily.    I then tinned the entire pad area with a thin coating of solder and drilled a small 1/16" dia. hole at the outer end of each of the three pads, and one along the common pad area.    It's easy to hand-solder the caps in place.

The existing wires are then bent around to align with these holes and soldered to the PCB.   The wires are quite stiff and sufficient to hold the PCB in place.   Finally,  install a new wire from a ground lug to the common pad on the PCB.   (Different radios may vary).

Once the rework is done the PA RF choke can be put back in and checked-out.   Improvements were made in the Collins 32V-3 to address the underlying conditions that contributed to early failure of the loading caps in the 32V-2.   The 32V-1 was different yet, so it's clear that Collins was still trying to make up it's mind about how best to implement the loading control, but with an added safety margin AND by following Collins recommended tune-up procedure I haven't have any issues with the replacements.

First the RF choke must be removed 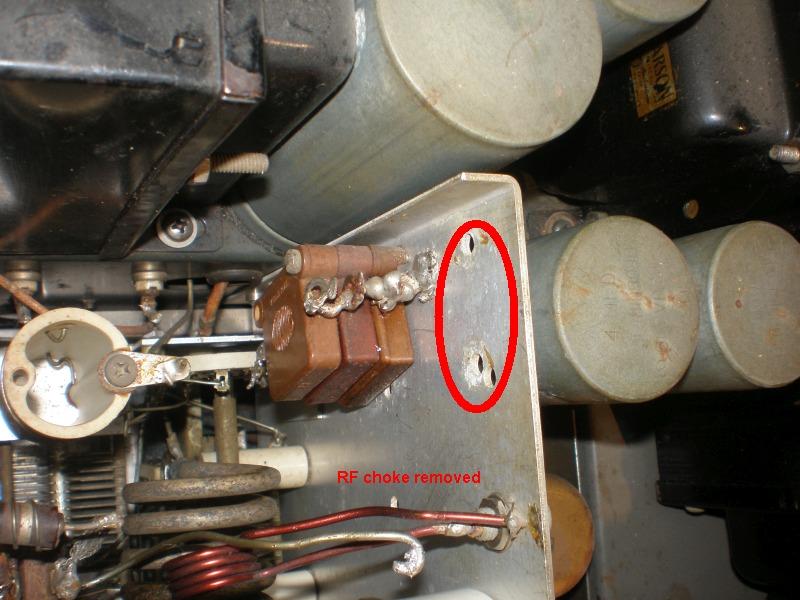 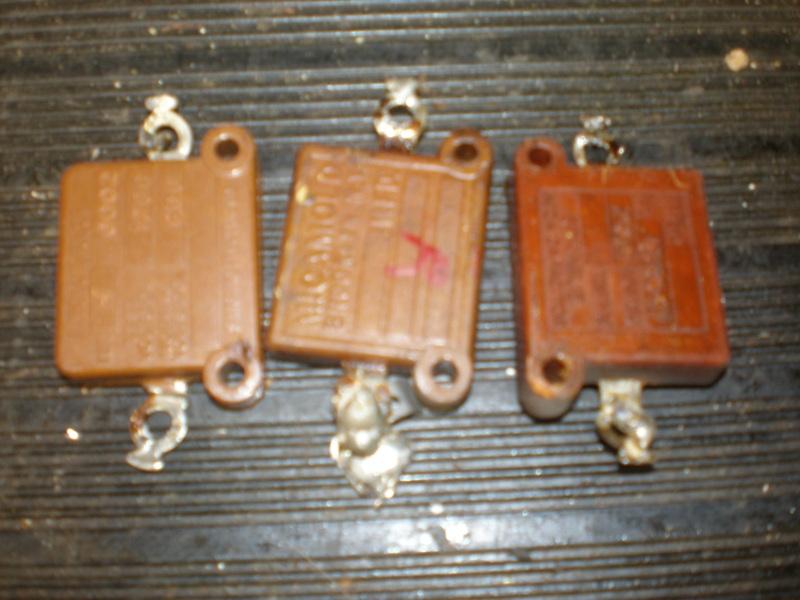 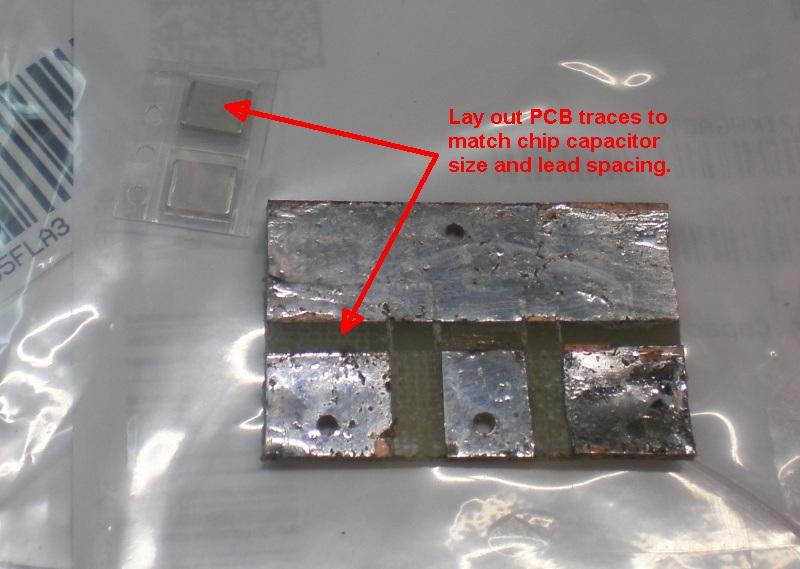 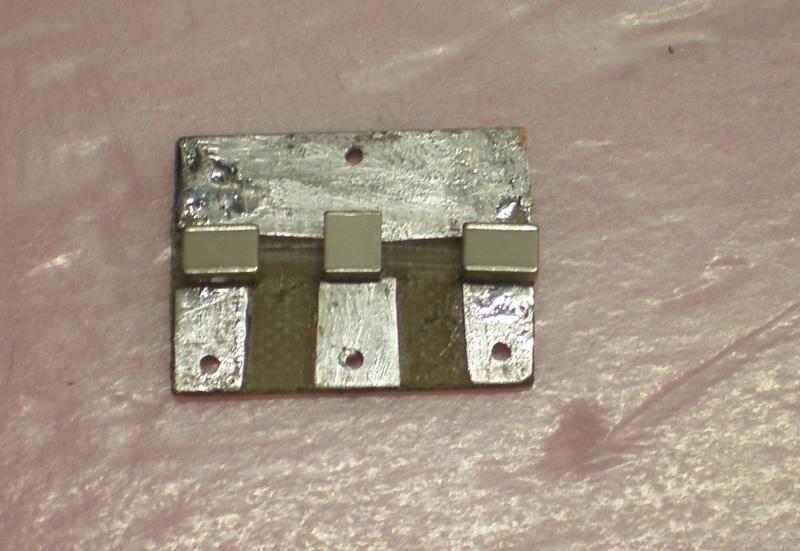 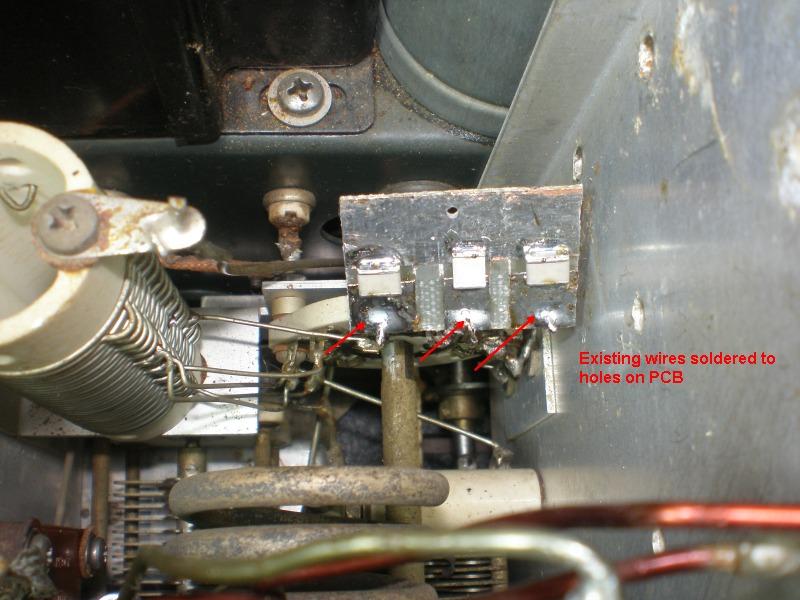 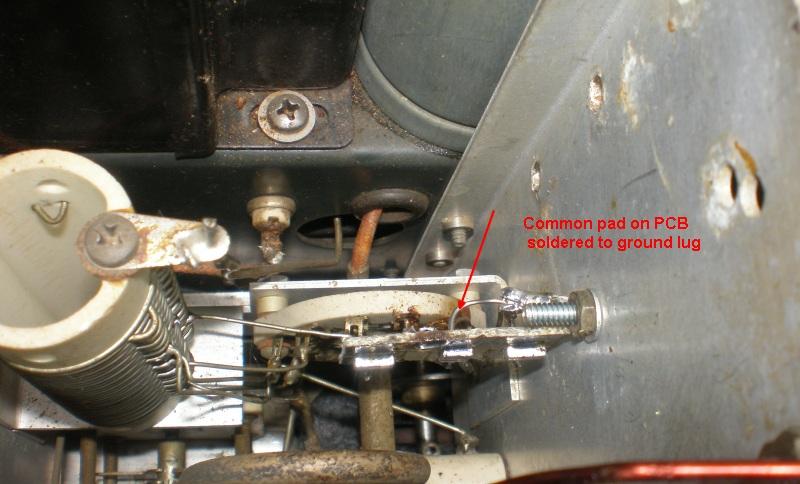 RF choke back in place 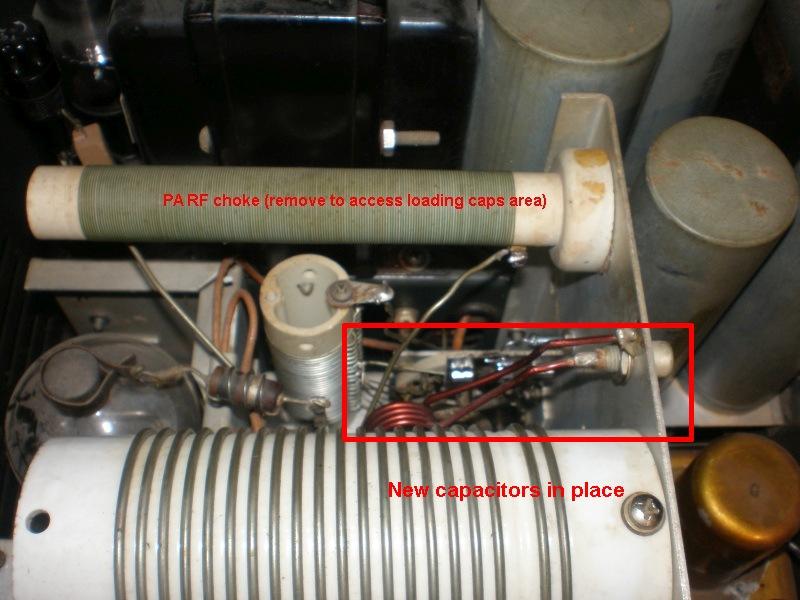