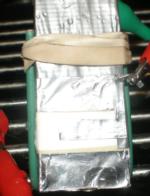 I'm not ready to publish a description of exactly HOW it works, but 20 minutes effort with scissors and tape produced a prototype  Droplet Energy Generator that allows me to say for sure that IT WORKS!

I duplicated the design shown in this video.   I wrapped a scrap of plastic in aluminum foil, then applied a strip of double-sided tape and to that attached a piece of PTFE thread-locking tape (a 260" x 1/2" roll sells for 53 cents at the hardware store).   I then applied duct tape to provide an insulated handle and a narrow strip to insulate the contact which I cut from aluminum tape (used for sealing joints in ductwork).   All in all the cost of materials is a few pennies!

A multimeter was attached to the two foil contacts and drops of water applied - voila!  A few dozen millivolts resulted.    It became clear that creating a stream of droplets was the hardest part of the experiment so I took it to the kitchen sink, set the faucet to as small a stream as I could, and here is the result   VIDEO

The small trickle of water produced a fairly consistent voltage in excess of 1/10th of a volt.   Now who would have bet that was possible before watching and reading this article?

One thing that is well understood is that raindrops carry an electric charge.  Another is that PTFE has a number of desirable properties:

Polytetrafluoroethylene (PTFE) is a synthetic fluoropolymer of tetrafluoroethylene that has numerous applications.  It was accidentally discovered in 1938 by Roy J. Plunkett while he was working in New Jersey for DuPont. As Plunkett attempted to make a new chlorofluorocarbon refrigerant, the tetrafluoroethylene gas in its pressure bottle stopped flowing before the bottle's weight had dropped to the point signaling "empty." Since Plunkett was measuring the amount of gas used by weighing the bottle, he became curious as to the source of the weight, and finally resorted to sawing the bottle apart. He found the bottle's interior coated with a waxy white material that was oddly slippery. Analysis showed that it was polymerized perfluoroethylene, with the iron from the inside of the container having acted as a catalyst at high pressure.

PTFE's Its extremely high bulk resistivity makes it an ideal material for fabricating long-life electrets - materials that carry a semi-permanent electrical charge, the electrostatic analog to a permanant magnet.   (In fact the name electret was coined by Oliver Heavyside 1885 by combining the words electron and matnet).

In this case, this seems to be the critical property for the "rain fuel generator".   When the tiny charge of electricity on a water droplet contact most materials it dissipates quickly but as a very good insulator, the PTFE which also carries a small permanent electrical charge acts to concentrate the charge until the conductive water droplet bridges a second electrical contact that causes it to discharge.  The researchers make a comparison to the water acting like the gate of a FET, causing a burst of current to flow when it is turned on.   That's as much theory as I care to speculate on at this point but to say this is an exciting technology that is being researched all over the world is no exaggeration.