The John Meck company of Plymouth IN made exactly one amateur radio product: the T-60 transmitter. It was sold under the name Meck as well as Tevlar and based on a limited sample, they are nowhere near identical.

The T-60 did not sell well and was only offered for a year or two. Among the reasons for this may have been the fact that it was a bit of an unusual design. On the positive side, it has separate 400 volt power supplies for the modulator and RF sections and a built-in antenna transfer relay, both of which are nice but did add to the cost of a low-power transmitter. Less understandable is the fact that it doubles on all bands, requiring the use of crystals at half the operating frequency, along with coils to match.

The T-60 I acquired from the Guretzky auction came with no coils and since I was only interested in 75 meter operation and wanted to use inexpensive (N4ESS) crystals for the AM window, I decided to follow the suggestion made by W9GT and convert to a modern Pierce type oscillator (as Jack suggested, I copied the 6AG7 oscillator used in the Johnson Adventurer and Knight 50 watter). The high gain of the 6AG7 makes it a good choice, but this meant the regenerative 6L6 oscillator circuitry was stripped and the chassis rewired. The normal oscillator coil would have been a 160 meter coil but since I didn't have one I just made an 80 meter coil using some old Airdux stock (23uH).

The oscillator worked fine but driving the original push-pull 6L6 PA produced very low output. I did some research and did find reference to straight-through P-P amplifiers, I got tired of messing around and just removed the old grid circuitry and wired the 6L6s grids in parallel. The plates already were, but although the tank coil was shunt fed, it used a link coupled output and I've never liked them. So again, lacking the proper coil I just made a new one (13-15uH). Since I always use an antenna tuner that provides the transmitter with a 50 ohm impedance there is no need for a wide range pi-net. Power output was 27-30 watts and I got good reports on the air, thanks to that separate modulator power supply that really helps make 100% positive peaks.

My buddy Harry N9CQX who started the “Meckers” group asked if I'd be willing to take a look at his transmitter, which was a T-60 but which bore the “Telvar” brand that was also used by the Meck Company (although I haven't found out for what). I confirmed what he said – low power and while he had an assortment of coils there was no 80 meter oscillator coil (since the original would have used 160 meter crystals for 80). He green-lighted my request to do what it took to make it work like mine, which was simplified by having already recapped the transmitter so the modulator and power supplies were in working order. It was also much nicer looking than my rusty-chassis Meck!

The oscillator circuit was stripped and rewired, overall the conversion was not a problem but I found difficulty getting some crystals to oscillate. The Knight manual says the 10pF capacitor from the screen to ground was required for the oscillator to start, and I found that increasing it to 100pF solved that problem. The attached schematic show roughly what the new transmitter circuit is like – I left out the metering and power supply and modulator circuits because they were unchanged. The two transmitters not only look different and have different model names, they also use different parts and are wired differently. I had to trace and ohm-out almost every wire to make sure I was doing it right vs. naively thinking I would just put the two on the bench side-by-side and copy one to the other!

Harrys transmitter came up to the same power level using my coils, so I then scrounged the bases and coil stock to make an identical set for him. Since I was out of 5 pin “octal-type” plugs that I'd used I salvaged a couple of ceramic plug-in coil bases. After many exchanges between the two rigs my original output coil started to fail. The problem with old Airdux is the styrene plastic used to hold the turns in place deteriorates, so I ended up winding a new one using enameled wire on the PVC form. About 15uH is required, the exact value is not critical. 30 watts from a pair of 6L6s was obtained by measuring the P-P RF voltage (110V P-P or 39V RMS) at the output when tuned into a 50 ohm dummy load:

Casualties: The panel meter on Harry's Meck proved to be defective and was not repaired. Meck used a #51 pilot lamp in the cathode return to provide an indicator that the transmitter is on and as a tuning aid. One of Harry's Silvertone 6L6s gave up the ghost while testing, evidently developing an internal plate to ? Short as it instantly caused this lamp to burn out. After “testing” two lamps I measured the cathode current and found it to be several hundred mA, which went away when the defective tube was removed. I didn't have #51s but the #44 is a good substitute.

I don't think the Meck T-60 was ever a good transmitter on the higher bands owing to the poor-mans frequency multiplication involved. It would have been easy to mistune to the wrong harmonic and efficiency would have been poor. But it was a way to put a signal on all the ham bands and was much cheaper than a stage or two of multipliers and tuned circuits would have been. Since most AM operation is on the lower bands the T-60 should be at home there and I'm sure a set of coils would allow 40 meter operation, and maybe even 160, with the new straight-through configuration.

Harry's Telvar showing the new homebrew coils, which were made from old tapped inductor stock removed from marine radios. The ability to adjust the inductance with the clip makes it easier to get things right. 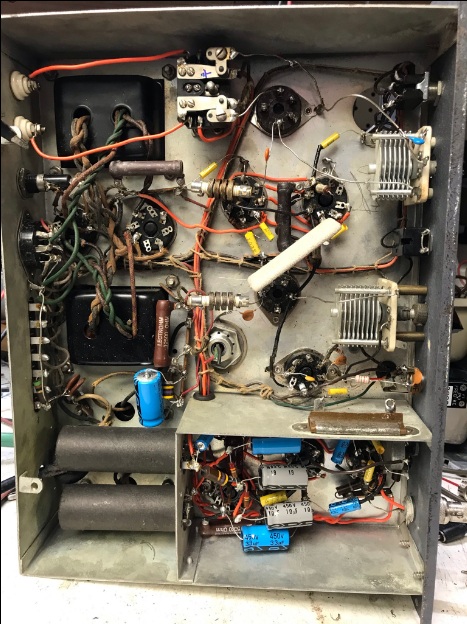 His re-capping efforts can be easily be seen. The large sand resistor is the 20K grid resistor on the PA grids and the antenna transfer relay is at the top (Notice the hole in the chassis. That is the place where the relay in my Meck is located ). Antenna and receiver connections are made on the rear panel as in most modern gear. The rear panel has the words “serial number” printed but no number was ever added, making me wonder if this might have been either a prototype or a decision was made to go with the Meck brand name instead of Telvar.

Another difference: the Telvar cabinet has rounded corners and a hinged lid. I think it is a standard off-the-shelf item produced by Bud or such. My Meck's cabinet is smaller with square corners and no lid. Another difference can be seen by comparing the two photos. One air variable has 7 stator plates and the other has 9 – but they are reversed (the Tevlar matches the schematic). Since the difference in capacitance can be compensated for it by the inductors that I constructed, I left them as-is.  Compare the variable caps in my Meck (below) with Harry's Telvar (above): 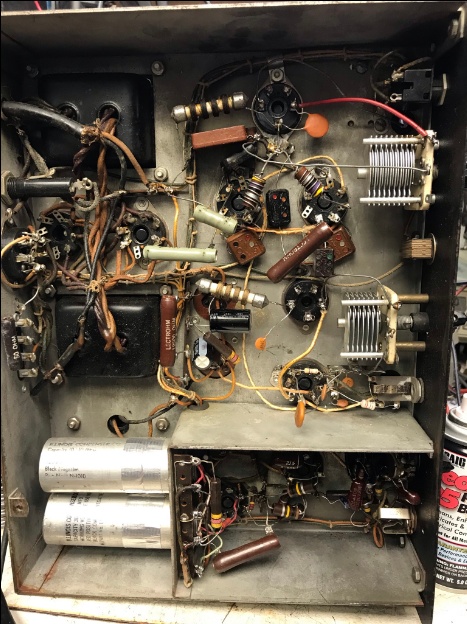 I chose to re-stuff the modulator power supply filter caps at the bottom so the appearance is more like the original. Small modern caps can be seen although the old micas that were still good were left in place. As in the Meck literature, the antenna connectors are on the front panel and the transfer relay is mounted on the top side of the chassis at the upper right, rather than underneath, as in Harry's Telvar. This seems to me somewhat reminiscent of the old pre-war transmitters. Some previous owner had mounted an SO-239 to the panel and installed a loading capacitor in one of the binding post holes. I determined the loading cap wasn't necessary and removed it. My transmitter has a Meck nameplate and there is no indication that any serial number had ever been issued to it either.

So while some mysteries will likely always remain about the Meck T-60 aka T-60-1 at least we know how to bring it into the modern era as a nice-sounding low power AM transmitter for 75 meters. 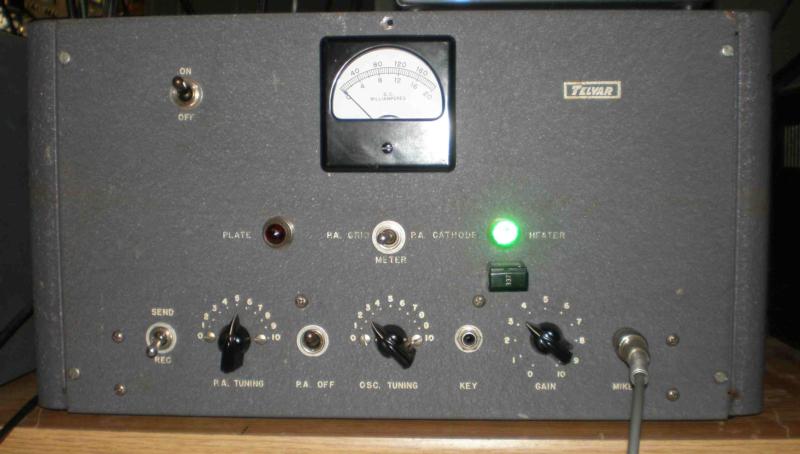 Harry's Telvar with my RME-99 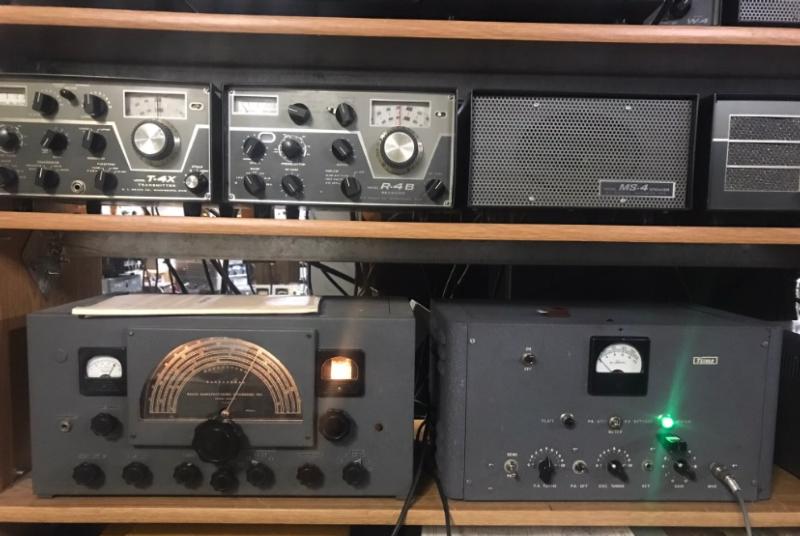 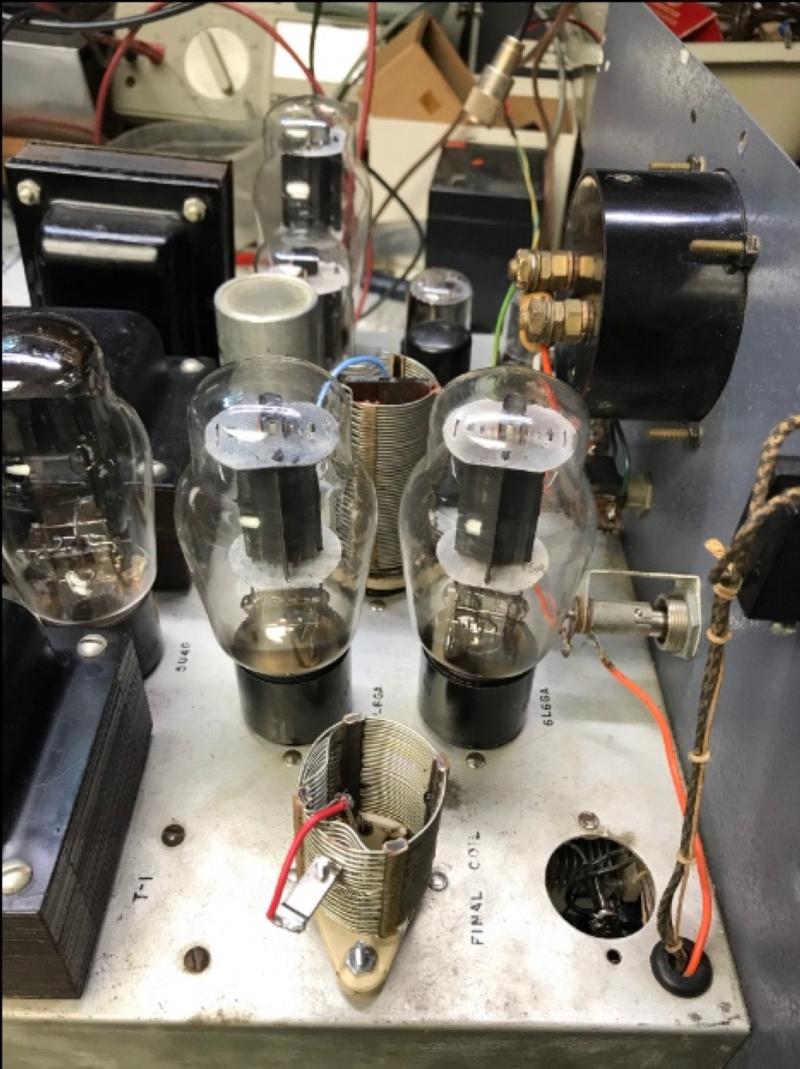 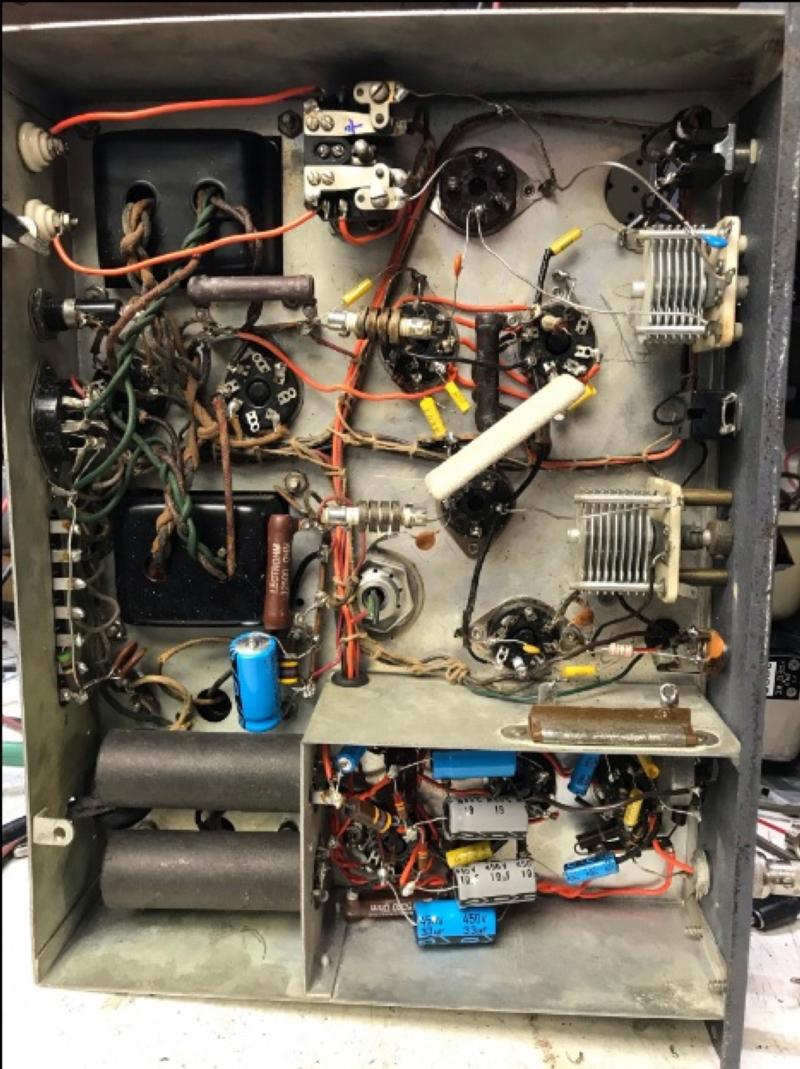 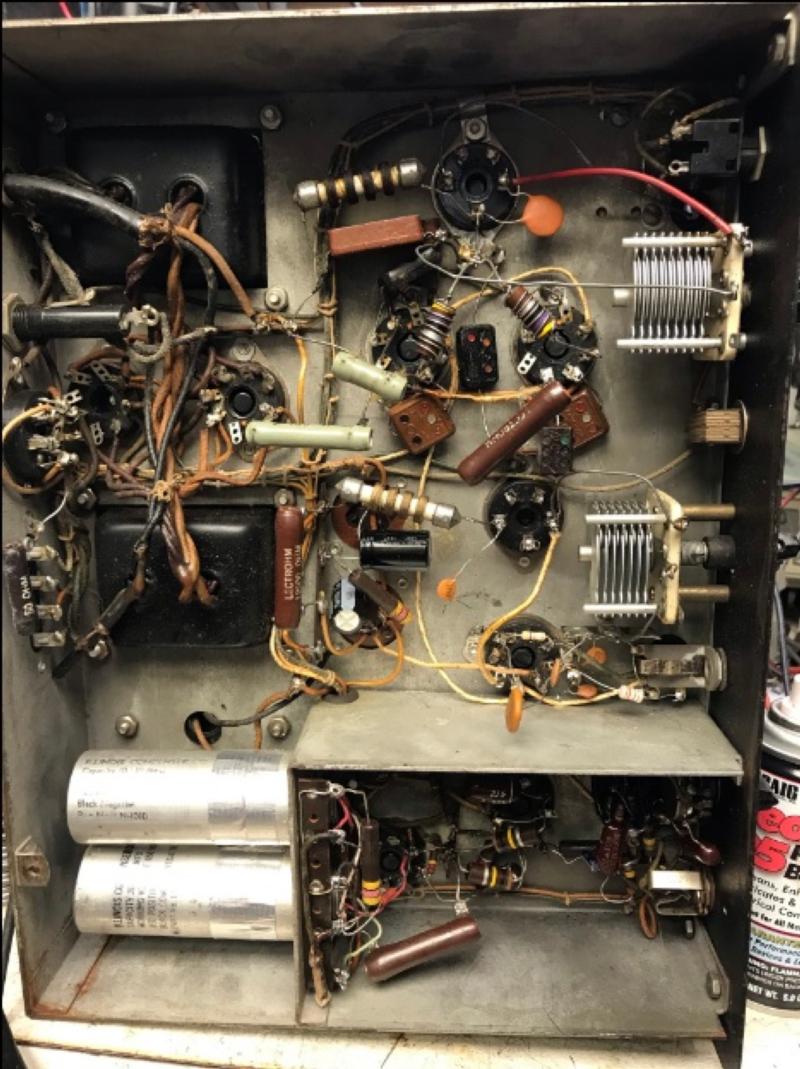