The Multi Elmac Company of Hazel Park and later, Oak Park MI is best know amongst hams for it's great mobile transmitters and receivers which were probably the most popular rigs of their type and are still often used on AM today.   The Multi Elmac Net pays tribute to these little rigs by and typically a half-dozen or more are heard on the net weekly.

But the company's origins were actually not in ham radio but in radio control.    The Multi-Products Company was founded in 1947 in Hazel Park, Michigan to, as the name implies, manufacture a variety of electronic equipment.  Eventually the product line encompassed amateur radio, citizens band and, commercial marine radios, but in the beginning the compay capitalized on the post-war housing boom and disposable income to produce controls for garage door openers that were operated by pressing a button in the vehicle. What a marvelous example of harnessing the power of electronics that must have seemed at the time!   These units were sold under the Multi-Elmac brand name even after The Stanley Works aquired the company in 1968 and is still used by the successor company, Stanley Black & Decker.    In fact you can buy a Multi Elmac brand garage door opener or remote at most home improvement stores even today!

Multi Products Company didn't invent the garage door opener - that was done by C.G. Johnson in 1926 in Hartford City, Indiana.  Electric Garage Door openers did not become popular until Era Meter Company of Chicago offered one after World War II where the overhead garage door could be opened via a key pad located on a post at the end of the driveway or a switch inside the garage.   I'm not sure that Multi Products invented the radio controlled opener because while the words "Patent Pending"  appear on the transmitter shown here,  it is impossible to search the USPTO database from that era without an actual patent number to determine the extent of any patents and prior art.   But maybe the company did at least contribute some unique ideas.    (If anyone has actual patent numbers from such a transmitter I'd like to research it to know for sure).

I did search out the two patents listed on the model ER-3 receiver that turned up in Google Image Search.   Both were issued to Gustav E. Undy and assigned to Multi Products Company in 1957 and 1959.   No mention is made of transmitter patents.   But I did find a couple of interesting nuggets:

- The first patent cited as prior art was filed in 1937 by Winfield Koch, issued in 1940 and assigned to RCA for a "Frequency Responsive Relay".   Not surprisingly, RCA invested heavily in finding and patenting many applications of radio.

- A subsequent patent was issued to General Electric Company an inventor Robert B. Dome in 1950 for a "Selective System" using multiple tones and audio tuned circuits.   The name "Dome" will be familar to early SSB enthusiasts as Robert Dome also developed the audio phase shift network used in all early phasing type transmitters made by Central Electronics and others.   Dome and his GE colleague Don Norgaard were instrumental in making single sideband possible, and Robert Dome's article on the design of phase shift networks can be found on page 112 here: https://www.americanradiohistory.com/Archive-Electronics/40s/Electronics-1946-12.pdf

- Another familiar name popped up in the Multi Elmac prior art citations, Laurens Hammond of Chicago IL, who was issued a patent in 1951 for a "Remote Control Apparatus".    Yes, he is "that" Hammond,  the prolific inventor who is best known for the creation of the Hammond Organ and the company that produced it for many years.

In any case, the unit shown is interesting as an example of how much electronics has changed in just 60 years. Having only part of the functionality of today's digitally-encoded keyfob type transmitters that can be lost in a pocket, the Multi Elmac model TP uses a single 12AT7 vacuum tube as a modulated UHF range RF oscillator that is powered via the cars 6 or 12 volt battery (the mid-50s were the time when cars were changing from 6 to 12 volts so it was important to support both).   A vibrator converts the battery DC to perhaps 150 volts DC for the B+, with a selenium rectifier and filter.    The large plug-in coil that is visible is marked "18KC"  which would be the modulating frequency that a matching coil in the receiver would be tuned to.    Choosing different tone frequencies would prevent interference between neighbors, assuming you lived in a neighborhood where someone nearby was flush enough to enjoy similar luxuries!    But despite it's size, bulk, and cost, seeing your garage door open at the press of a button from the driveway must have been quite a thrill.

Your guess is as good as mine as to what a Multi Elmac remote control might have cost back then, but it would be a tiny fraction of what we pay for similar functionality today, even if you don't account for inflation. 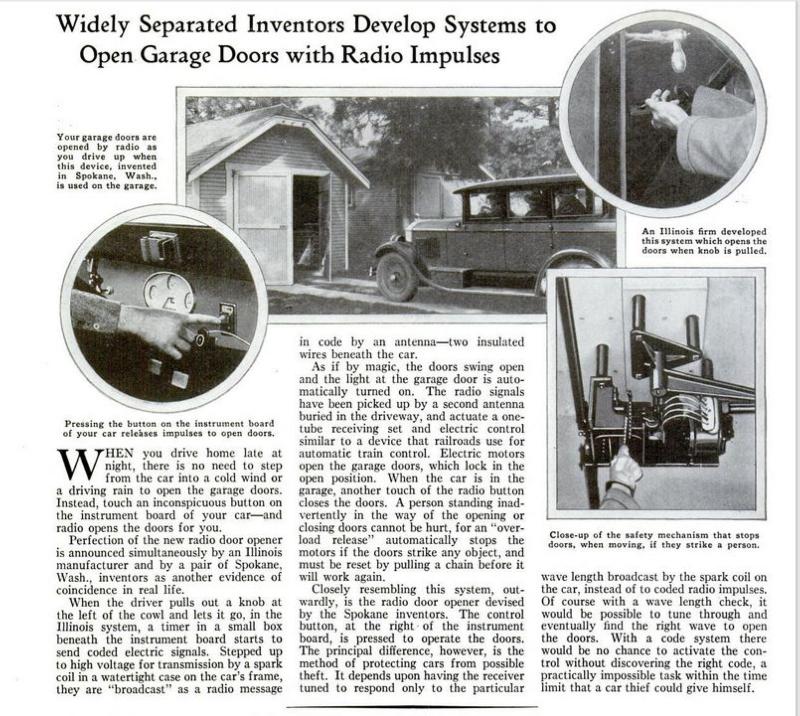 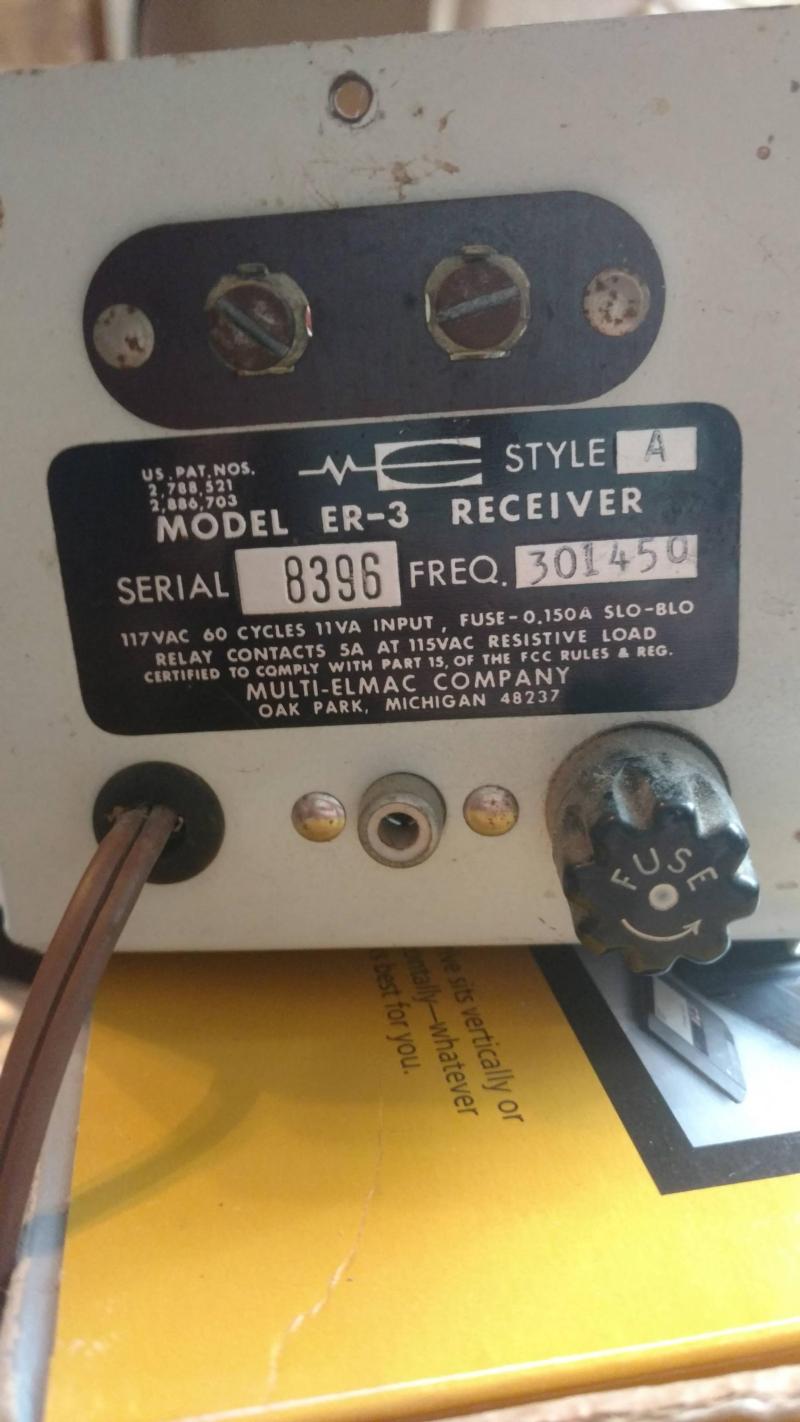 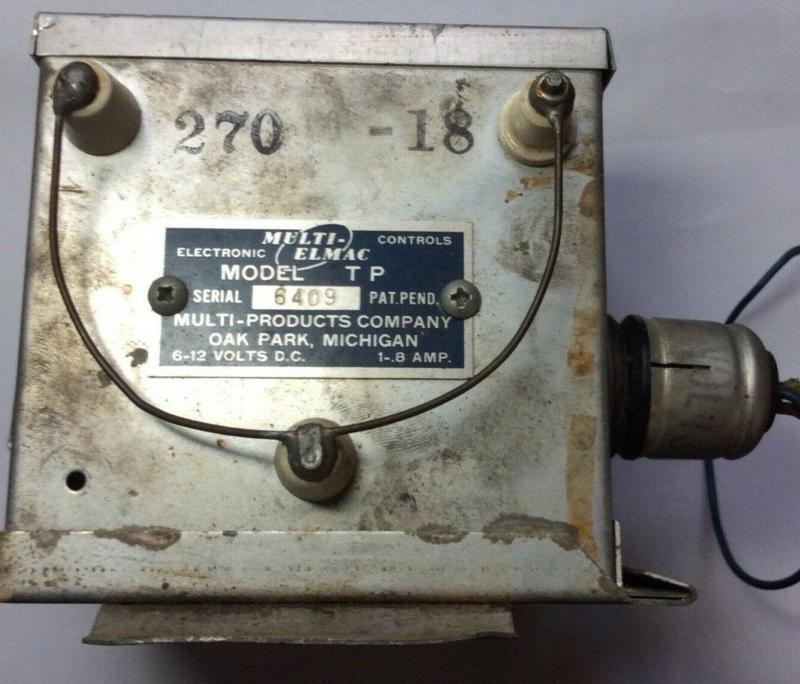 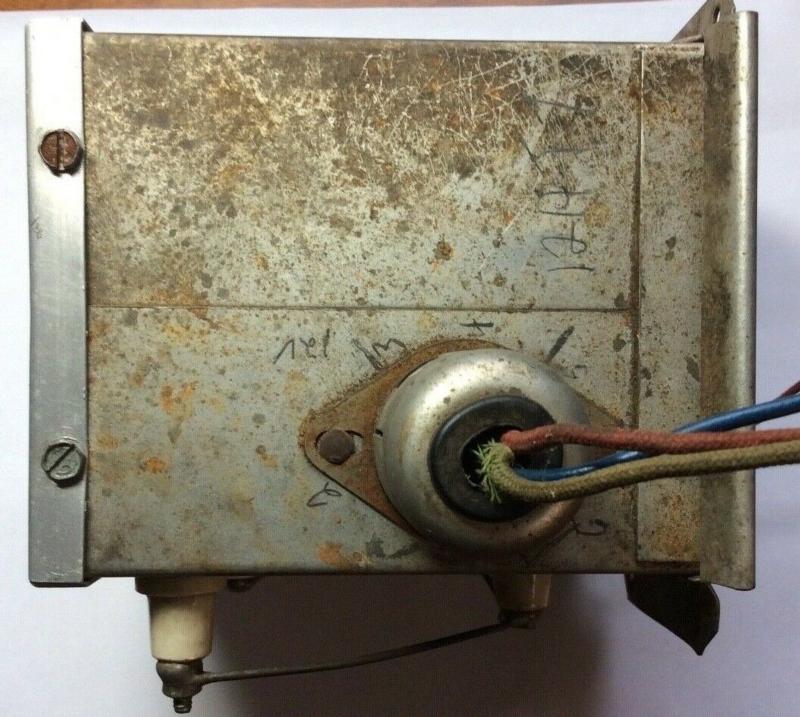 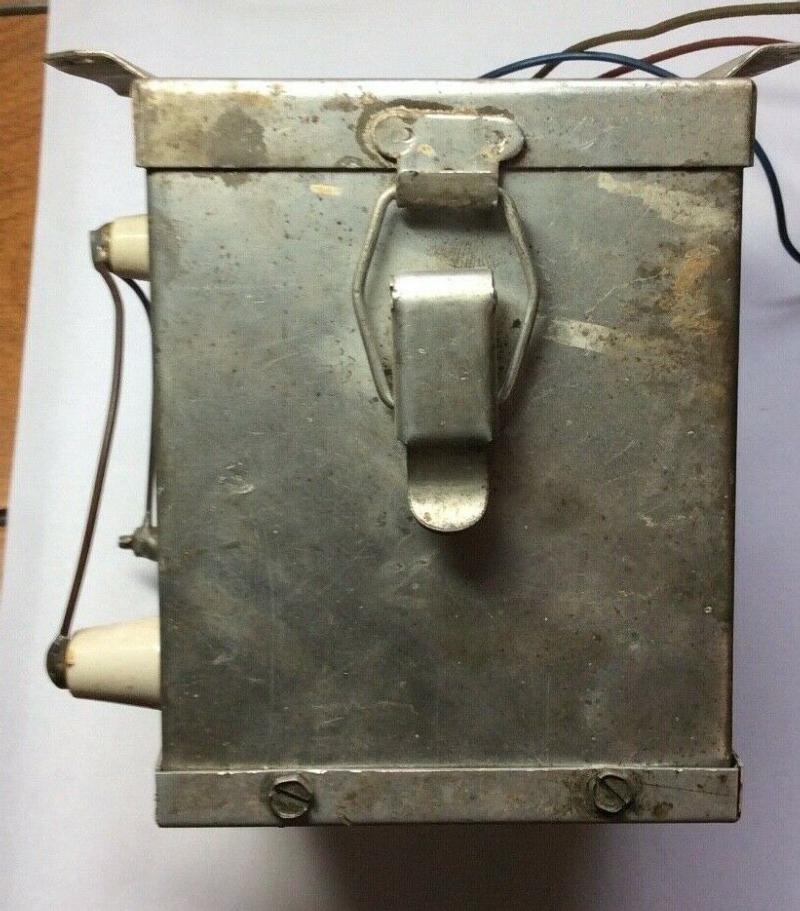 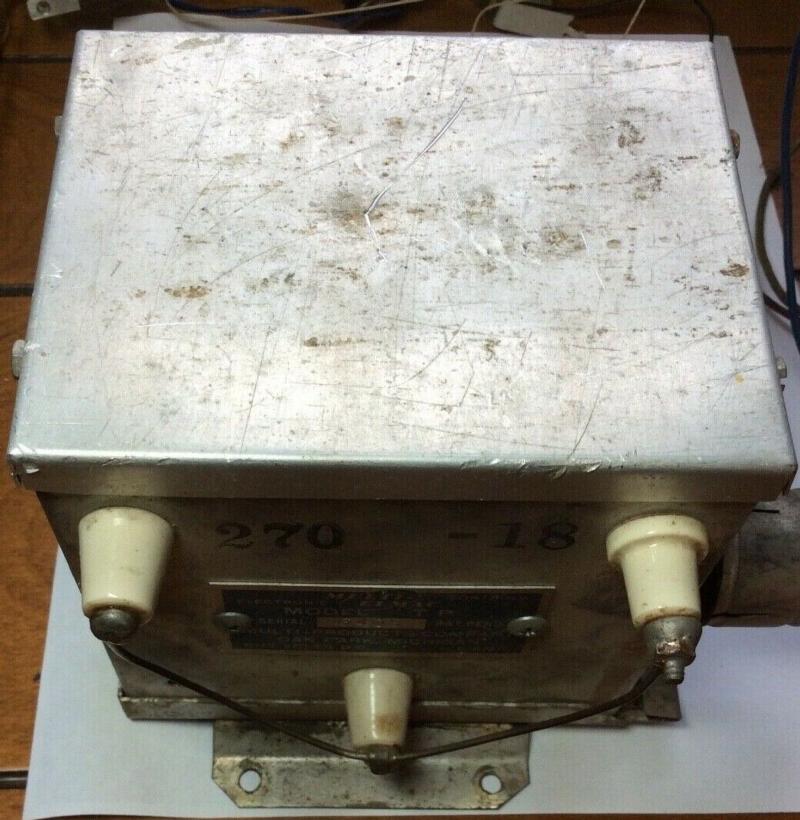 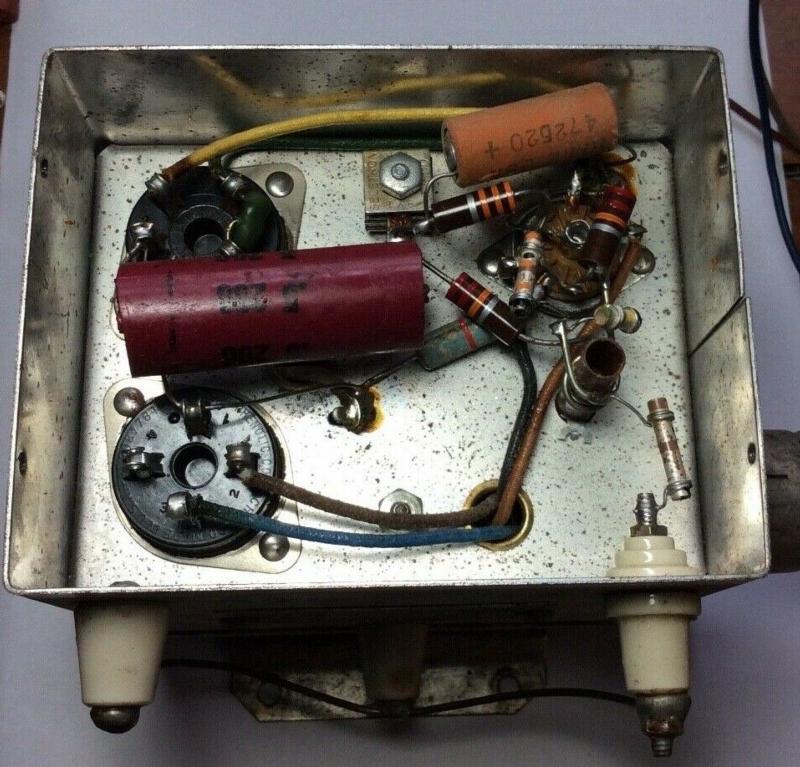 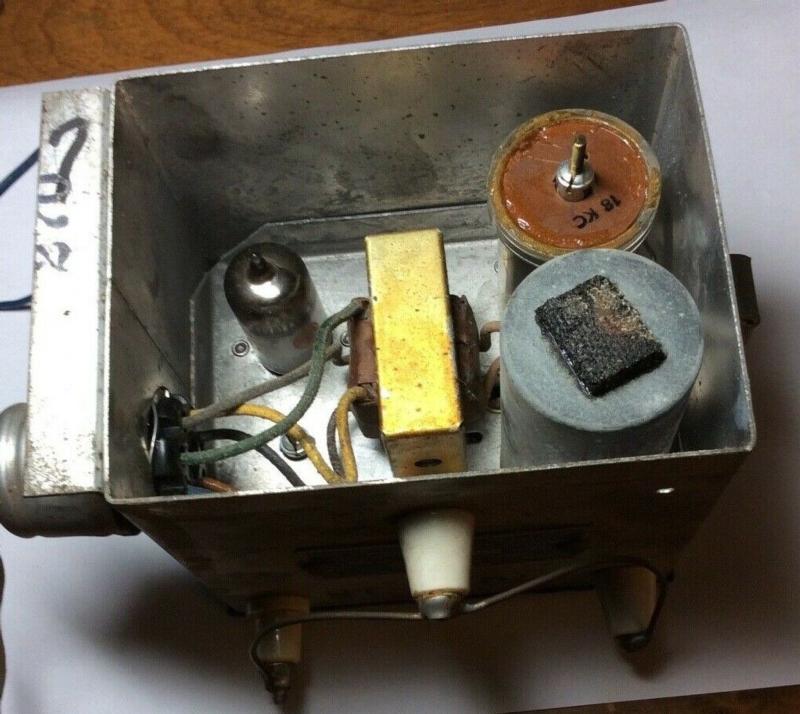