Demo of simple AM BC receiver breadboard

I'm nuts for minimalist solutions...as the wise old engineers would say "It's easy to make a circuit work if there's no limit on parts or cost".    Early television mogul Earl "Mad Man" Muntz fumed about "overengineering" and gained notoriety by snipping out components until the picture or sound stopped working, then told his engineer "Well I guess you have to put that part back In".

But  to my way of thinking, minimalist designs aren't just corner-cutting, and often take advantage of unique capabilities of components or circuits to accomplish a task in an an elegant way.   That's why I was instantly intrigued by a thread on Radioboard about using an LM386 audio amplifier IC as a regenerative AM broadcast band radio.    Here's a link to that site and I suggest reading it to the end as multiple improved circuits and tradeoffs are discussed:   http://theradioboard.com/rb/viewtopic.php?f=4&t=6413&sid=07d79a1d8c3cb46ad619ac2ba35b7502

The LM386 was invented by Ernie Leroy Long at Motorola in 1969. It was originally for part of a fuel injection system for a Ford vehicle and integrates 8 transistors in an 8 pin DIP package that runs from 9 to 12 volts DC.   It has become ubiqitous for low-cost audio amplification in millions of devices from toys to QRP rigs.    Occasionally I've seen deviations from the reference design in the databooks but credit goes to user "Selenium" at Radioboard for being the first to figure out how to introduce regeneration and apply it as a complete AM radio receiver, not just the audio section of one.

Interestingly this wasn't the first application of an audio IC as a regenerative detector - the discussion above included a datasheet for the 1956 vintage Westinghouse WC183 hearing aid amplifier that shows one.   It seems like this idea has been a long time coming!

I think this simple circuit can be the basis of a number of interesting projects - it sure doesn't take much to make one and try it out.   With a high-Q coils many signals should be audible with a minimal antenna (or none) in urban areas.  Current consumption is low enough that battery operation is feasible and loudspeaker volume always beats having to wear a pair of ear-squeezers!

The recenerative circuit was invented by Major Edwin Armstong in 1912 while still an undergraduate at Columbia University and patented in 1914.  While he later went on to develop the superheterodyne receiver and FM, in my view the elegant simplicity of regeneration is his crowning acheivement.

Here is the schematic I used - see the link above for other variations and feel free to experiment: 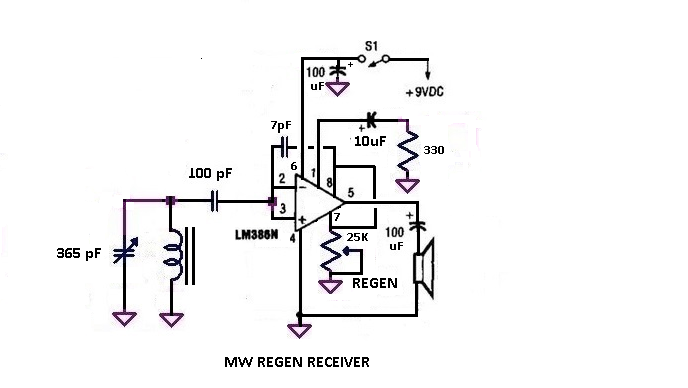 Radio Aids to Navigation: the Radio Range and Radio Compass

1941 Training Film by the US Army Air Corps

Treasures and Pleasures of the 1960s

Do we, do we remember these?

History of the American Radio DJ

How a ham and sound engineer revolutionized rock and roll

Inventor of the first digital mode

Simple AM BC Radio using just an LM-386 audio IC

Computer graphics in 1968 and the shape of things to come

Battle of the Boatanchor Radios?